The Cornish Pumphouse is a relic of the original gold mine in Waihi – the richest gold mine in New Zealand (1878-1952).

Built around 1904, from a design used in the tin mines of Cornwall, England, the structure housed steam engines and pumping machinery. The pumps were needed to cope with the ever increasing quantities of water as the mine workings followed the gold-bearing quartz reefs to a final depth of 600 metres.

Constructed by Hathorn-Davey, the horizontal Cornish pump was the pride of the New Zealand mining industry. The pump had a stroke of 4 metres and continuously dewatered the mine workings at a rate of 7000 litres per minute via No 5 shaft, which was situated adjacent. No 5 shaft had a depth of 399 metres.

The pump was used until 1913 when the Waihi Gold Mining Company completed the first hydro electric power station on the Waikato River at Horahora (now below the waters of Lake Karapiro). The power was brought 80 kilometres to the mine on wires supported by 469 steel towers. Electric centrifugal pumps deep in the mine were then used for dewatering.

The pumphouse was kept in working order until 1929 as the miners did not trust electricity. By the early 1930s the building was stripped of machinery and left derelict as the mine continued to operate.

In 1987 the area was fenced for public safety. The Company carried out planting in the area, and provided a car park, access track and a viewing platform overlooking the open pit.

Today the remains of the pumphouse are protected by the Historic Places Trust and the building is a Waihi landmark and tourist attraction.

Extracts From The Past

The following information has been sourced from NZ Papers and Reports Related to Minerals and Mining, 1904.

“In the Northern district the chief centre of activity is Waihi. The Waihi Gold-mining Company’s mine and plant have been further extended, and, with a view to the development of the property at deeper levels, preparations are being made for the erection of a very large pumping-engine at No.5 shaft. There is already a compound Hathorn-Davey differential Cornish pumping-engine at No.2 shaft, and also a similar engine, having a stroke of 10ft. and working a 17in. diameter set of pumps at No.5 shaft. This latter shaft is intended solely for pumping purposes. When the new pump and engine are erected the present pump will be utilised for unwatering the shaft below its present level as the work of sinking proceeds, the new pump – 24in. in diameter by 12 ft. stroke, worked by compound Hathorn-Davey differential engine – being used to lift the water from the present lodgement to the surface.”

“The great Waihi Mine has produced over fifty thousand pounds’ worth of gold every month during the past year, and the company has displayed its usual energy in its mining operations. A new pumping plant has been imported to supplement those already in use. It is said that when this plant is erected and in working-order, the company will have pumping machinery valued at £130,000. The new pump is for erection at the No.5 shaft, indeed its erection is nearly completed. It is a very massive piece of machinery, and going at a nominal speed, will raise 1,500 gallons of water per minute to a height of 1,550 ft.

At No.5 shaft the installation of the new pumping engine known as C pump has been proceeding for some months. … Very massive concrete foundations were necessary owing to the nature of the ground. The high-pressure cylinder, bed, guides, and cross-head are erected in position; the large plummer-blocks for trunnion of beam fixed in position, and the beam (which was delivered in three lengths) is now being riveted together. The low pressure cylinder, weighing with its wooden lagging some 23 tons, was delivered at the shaft in December. The concrete walls of the pump-buildings are approaching completion.

“At the No.5 shaft the new Hathorn-Davey pump and two Babcock and Wilcox boilers have been erected, and the necessary building, flue, and chimney and pump column obtained.”

NZ Papers and Reports Related to Minerals and Mining, 1904 can be found in the Waihi Gold Mining Museum & Arts Centre. 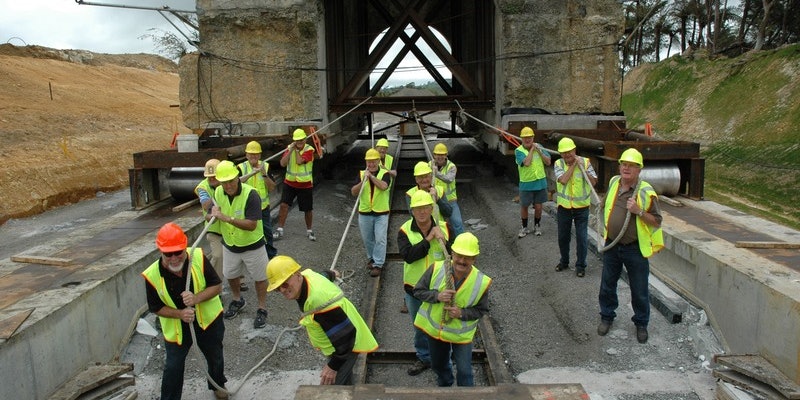 Pumphouse on the move