The waste rock embankments are designed as earth/rock-fill water-retaining structures. This is conservative, as with time the tailings will consolidate and become essentially soils with inherent shear strength, unlike water. Following the cessation of tailings deposition and completion of tailings consolidation the risk of release of tailings is almost inconceivable because of its inherent strength.

Surface runoff from upslope of the operating tailings pond TSF 1A is diverted away from the area. The only water other than that contained in tailings which is added to the tailings pond is direct rainfall. The embankment crest level is designed to provide a safe height above the tailings plus stored water level. Storage capacity is provided for a 1200 mm rainstorm, (the Probable Maximum Precipitation), plus an additional 1.0 m minimum freeboard. This is to ensure that the water in the tailings pond, which contains some cyanide, cannot overtop and find its way into surrounding rivers and streams in a severe rain event. The target crest levels are reviewed on an ongoing basis. It is important to ensure that the height of the embankment structure increases at a sufficient rate to ‘keep up’ with tailings production.

The downstream shoulder of the embankment is considerably flatter than would normally be the case for water retaining embankments because of the need to use large quantities of waste rock. The slope of the downstream shoulder of Storage 2 is typically 4:1 (horiz:vert), but at the steepest section is up to 3.2:1. The slope of the downstream shoulder of Storage 1A is typically 4:1. This compares to 2:1 for the Benmore Dam which is a large water storage dam used for hydro-electric power generation, and the highest hydro dam in New Zealand. The flatter than normal embankment slopes allow development of high quality pasture for livestock farming. Additionally there are reduced risks of surface erosion and decreased maintenance requirements.

Waihi is an area of historically low seismicity. Earthquakes have been felt in Waihi, but none in the last 150 years has caused high levels of shaking. The embankments have been designed to resist the effects of earthquake shaking from the Maximum Credible Earthquake (MCE) based on a seismic hazard study of the site in accordance with international guidelines. The MCE has been conservatively assessed to be a magnitude MW 7 earthquake at a distance of nine kilometres from the site. 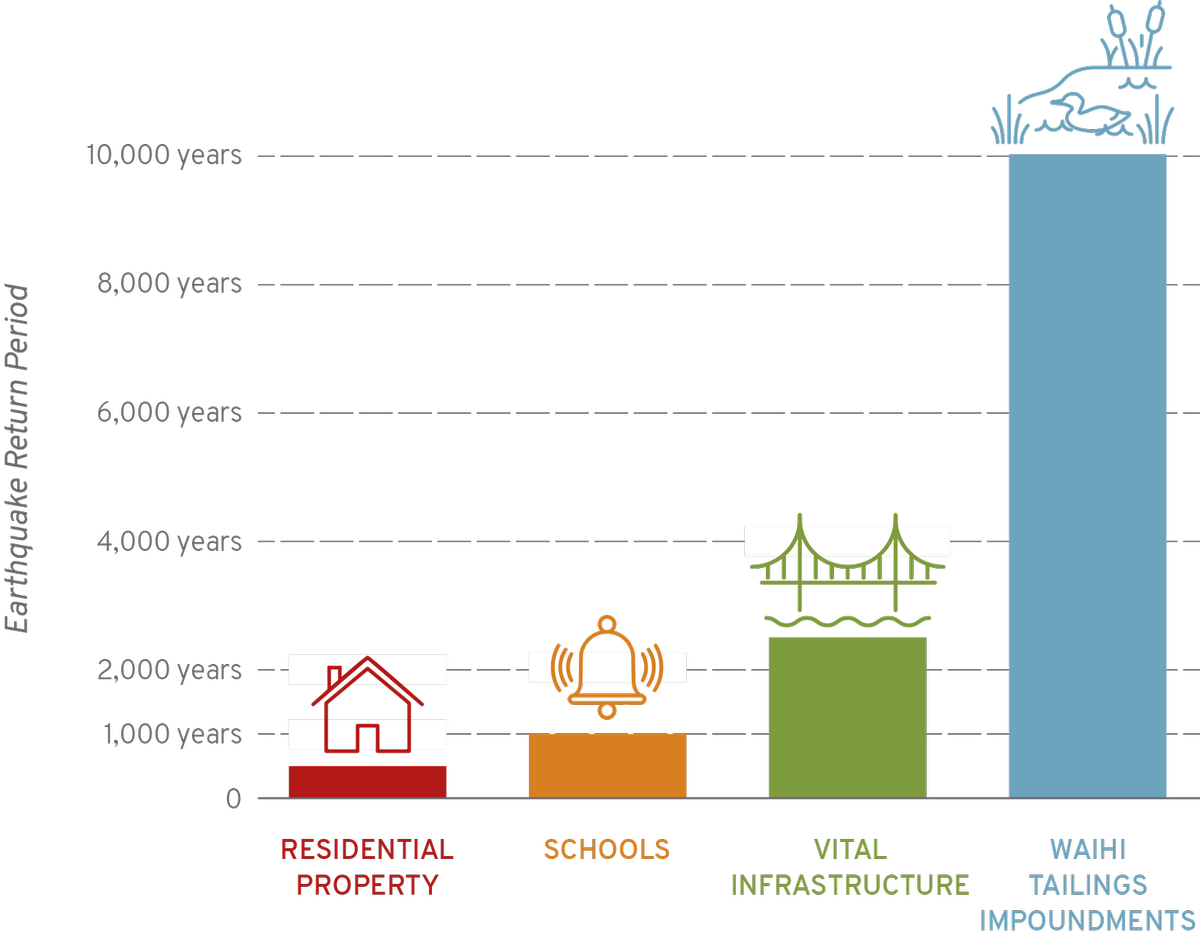 The embankment design requires the removal of all weak foundation materials below structural fill zones (i.e. A, B, C, F and G) and the installation of subsoil drains in gullies containing alluvium to ensure embankment stability. In practice this means that the weak material beneath much of the embankments is removed down to bedrock and replaced by good quality fill. This is desirable from the point of view of stability.

Construction of the embankments requires the selective use and zoning of waste rock materials and the controlled placement of waste rock fill. Embankment zoning provides for:

Due to the presence of potentially acid forming (PAF) rock, special design and construction measures are required. PAF material is placed upon a low permeability under-blanket and drains collect any leachate that is generated. Oxygen and water ingress is limited by rolling and compaction, and the placement of intermediate sealing layers. During construction, limestone is applied to exposed PAF rock to control acid generation. In the long term generation of acid leachate is prevented by isolating PAF rock from atmospheric oxygen by the construction of a special layer on the outside of the embankment (Zone G).

The various zones of the embankments are described below:

Zone A
Forms the base under-blanket, upstream cutoff and downstream cutoff of the embankments. It has a thickness of 1.5m and is constructed using materials that have no acid drainage generating potential. It is required for internal leachate and foundation seepage control, and accordingly the construction specification sets limits for permeability (not greater than 10-8 m/s), air voids and undrained shear strength.

Zone B
Forms the upstream structural shoulder of the embankments. Both NAF and PAF rock may be used, except PAF material is not to be used within 5m of the crest level. This zone controls seepage from the tailings as well as contributing to strength. Accordingly the construction specification sets limits for permeability (not greater than 10-8 m/s), air voids and undrained shear strength.

Zone C
Forms the remainder of the upstream structural portion of the embankments, and forms a transition between Zones B and D. PAF material may be used providing that it is placed according to geochemical control requirements. Depending upon location, the construction specification sets limits for strength, particle size grading after compaction, and air voids.

Zone D
Forms the bulk of the embankments, contributing to strength and allowing disposal of a large volume of waste rock, The construction specification sets limits for undrained shear strength. Zone D may comprise material from a mixture of different source materials, including PAF, provided that such material is placed according to geochemical control requirements, including compacting and sealing at regular intervals, and limiting the lift height.

Zone E
Sub-compartments of Zone D comprise the softest and wettest waste rock, deemed to be unsuitable for placement in Zone D. These sub-compartments are located in areas where the finished embankment slopes are flattest and are well away from the downstream toe of the embankment so as to avoid potential instability. Waste rock in Zone E is placed in lifts no greater than 2.5 m thick and the total surface is bladed out and track rolled to achieve a smooth, tight surface so that ponding and infiltration of water is minimised.

Zone F
Forms a transition zone between waste rock in Zone D and Zone G. It is structural fill (1.5 m thick) to reduce the risk of earthquake-induced shallow seated deformation of the downstream shoulder. Zone F may be a mixture of different waste rock or on-site materials. The construction specification sets limits for air voids and scala penetration.

Zone G (the cap)
The outer seal layer (1.5 m thick) that acts both as an oxygen diffusion barrier and controls infiltration of water into the embankments. Zone G is only constructed from NAF waste rock or on-site materials that have no acid drainage generating potential. The construction specification sets limits for permeability (not greater than 10-8 m/s), air voids, undrained shear strength and degree of saturation. Materials are selected so that when compacted they provide a tight layer. This tight layer only allows a small amount of water to move through it slowly. The slow movement of water through this layer ensures that this layer is near saturated, all of the time. Saturation occurs when the pore spaces are full of water. Where the pore spaces are full of water then there is no easy path for air containing oxygen to enter the waste rock. Hence Zone G acts to both limit water inflow to the waste and at the same time limiting oxygen inflow to the waste. Maintaining a high degree of saturation within the cap allows a very low rate of oxygen movement into the embankments beneath because oxygen moves 10,000 times more slowly through water than it does through air.

Zone H
Forms the final rehabilitation cover to the downstream shoulder of the embankments. Zone H is constructed from only NAF waste rock or suitable on-site materials. This material is then overlain by a topsoil layer for vegetation growth. The construction specification sets limits, including limits on air voids, and particle size. From time to time the embankment pasture is seeded with earthworms to help improve pasture quality.