Millions of years ago, during the Miocene Period, a thick sequence of volcanic lavas, breccias and tuffs of generally andesitic composition was deposited to form the bedrock of Waihi and surrounding districts. Some considerable time later earthquake activity formed numerous near-vertical planar fractures in the bedrock which became channels for large volumes of ascending geothermal water. The old land surface, high above the present Martha Mine, would have resembled Rotorua, with hot pools, steaming ground, and geysers.

As the dissolved mineral-rich water ascended, cooled and the pressure released, many minerals came out of solution. They deposited or crystallized on the sides of the fractures. The predominant minerals were quartz (SiO2 ) and calcite (CaCO3 ). Gold and silver crystalized as electrum (Au-Ag alloy), native gold (Au) and acanthite (Ag2S). The geothermal fluids also altered the chemistry of the rocks they passed through, forming minerals like pyrite (FeS2), adularia feldspar (KAlSi3O8 ), calcite, chlorite and illite clay. Many of these mineral-filled fractures (or veins) intersected to form a complex lattice frame-work deep underground. The largest vein (Martha Lode) reached dimensions of at least 1.6 km long by 600 m deep and up to 30 m wide.

Millions of years of erosion removed hundreds of vertical metres off the volcanic rock sequence and progressively exposed the quartz vein lattice. Being relatively resistant to erosion, this lattice caused an ancient topographic high. Cold surface ground waters percolating down caused oxidation reactions in the andesite, changing it from a blue-grey to an orange-brown colour through the oxidation of pyrite to limonite.

The complex myriad of veins within Martha comprises an epithermal gold-silver orebody which is giant by world standards. The larger veins were extensively, but not completely, mined out by underground methods between 1878 and 1952. Numerous smaller veins remained untouched by the previous miners and are today able to be extracted by selective open-pit and underground mining methods. Material containing as little as one gram of gold per tonne of rock is able to be mined and milled economically using modern technology. The average grade is three grams of gold and 30 grams of silver per tonne. Since 1987, an average of around 100,000 ounces of gold is produced annually. 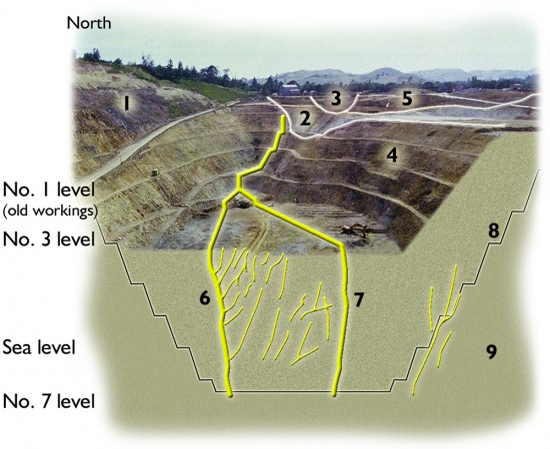 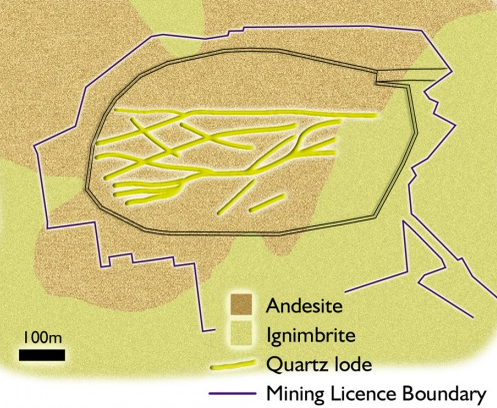 Understanding the local geology is a very important part of mining, both economically and environmentally. The geology of the site will affect mining, processing, and the ways in which waste rock, tailings and water are managed. It is also an important aspect of rehabilitation plans.

Gold does not exist as nuggets at Waihi as it can do in other areas. Generally the gold is not visible. It is bound within the host rock and must be removed by chemical means. It is not possible to determine how much gold is in a rock just by looking at it. The gold content must be determined by testing in a laboratory. For further information see Assaying.

While the waste rock at Waihi is mainly andesite; volcanic breccia, clays, tuffs and ignimbrite are also present. The andesite and volcanic breccia rock types exhibit various degrees of weathering and are referred to as either oxidised, unoxidised, or mixed.

Test work confirms that all oxidised rock, ignimbrite, clays and tuffs are non acid forming (NAF). In contrast, the mixed and unoxidised andesite and volcanic breccia contain variable amounts of sulphide sulphur, predominantly pyrite, with an expected range of 0.5% to 3.0% S. Much of this rock is potentially acid forming (PAF).

The quantities of PAF and NAF material must be determined to allow for mine planning. PAF rock has the potential to produce acid drainage, and it must be managed in such a way as to avoid significant adverse environmental effects in both the short and the long term. The management and long term storage of PAF rock is a major feature in the design of the tailings storage facilities and waste rock embankments.