The processing plant has the capacity to treat up to 1.25 million tonnes of ore per annum.

These stages can be described under three main headings: 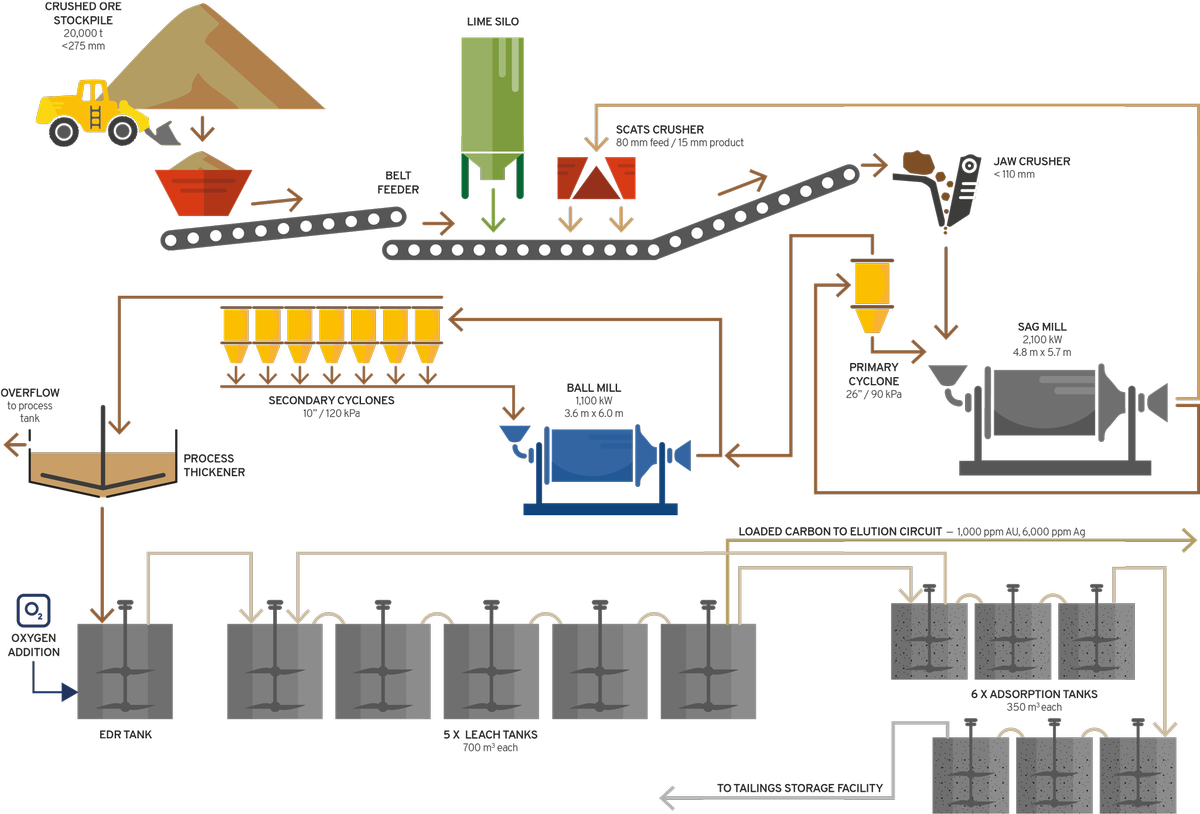 Ore processing is a 24 hour operation. Ore is stockpiled at the processing plant, and the process begins by feeding the ore into a hopper with a loader. The ore is conveyed, and lime is added to raise its pH.

Following crushing through a jaw crusher, the ore is fed into the semi autogenous grinding (SAG) mill  along with water and steel balls. The grinding process reduces the rock to a slurry. The SAG mill is a large revolving cylinder. Rock is ground by the turning action of the mill, and impact from the hardened steel balls and the rock itself. In order to ensure that the rock is ground finely enough the SAG mill has a trommel screen, which acts like a large sieve. The oversize rock (SCATS) is caught by the trommel, along with the worn hardened steel balls, and this material is fed past a magnet to separate out the steel balls. The oversize rock passes through the SCATS cone crusher prior to passing once again into the SAG mill for further grinding.

The secondary hydrocyclone further classifies the slurry, with the coarse particles being directed to the ball mill. and fine particles reporting to the trash screen. The ball mill is very similar to the SAG mill, except it has a larger proportion of steel balls to assist in the grinding process.

Following grinding in the ball mill, the material is returned via the sump to the secondary hydrocyclone for resizing. The trash screen removes any wood (from the old mine workings) that may have found its way into the processing circuit.

The slurry that remains after this process has a very fine particle size. Typically, 80% of the ore particles are less than 70 microns in size (about the same consistency as fine beach sand). Such a fine particle size is required for gold liberation – the size required for the cyanide to be able to ‘see’ the gold in the leaching process.

The remaining slurry passes through a pre-leach thickener to remove some of the water. The recovered water is reused in the grinding circuit, while the thickened slurry moves into the leaching circuit.

The slurry (1) of ground ore and lime moves into a series of six leach tanks (2) where a sodium cyanide solution is added. The tanks provide sufficient retention time to allow the gold and silver to be dissolved by the cyanide solution. Oxygen is added to assist in this process.

By the time the slurry reaches the final adsorption tank, most of the precious metals have been removed. The barren slurry, now known as tailings, is pumped to the tailings storage facility (5). In contrast, by the time the carbon reaches the first adsorption tank it has recovered most of the gold and silver from solution. This ‘loaded’ carbon is then pumped to the elution circuit (6) where the gold and silver is washed off with superheated water. The washed solution, called pregnant eluate, is passed to the electrowinning circuit (7). The remaining barren carbon is reactivated by acid washing and kilning and returned to the adsorption tanks (8).

The pregnant eluate (1) is passed through a series of electrowinning cells (2), containing cathodes in the form of stainless steel plates. The gold and silver migrates and attaches itself to the stainless steel cathodes. The cathodes are then rinsed, yielding a muddy sludge, and the cathodes are reused. The muddy sludge is dried (3), and the powder that remains is mixed with fluxes (4) and put into the furnace (5). The furnace attains a temperature of 1200 degrees C and after several hours the molten material is poured into a cascade of moulds (6) to produce doré bullion bars. The fluxes form a slag of impurities which is removed, leaving a bar which is a 99% pure melt of gold and silver. Each bar of doré bullion contains around 75% – 90% silver and 10% – 25% gold, and weighs approximately 20 kg.

The bullion is sent to the Western Australian Mint in Perth, where it is further refined to separate the gold from the silver. After refining, the gold and silver is credited to the OceanaGold mint account and the precious metals are sent to the international market.