The cyanide process of gold recovery enabled a higher percentage of gold and silver to be extracted from hard rock, making many operations viable that would otherwise have had to close. The world class Martha Mine has a history spanning three centuries. Together with its historic use up to 1952, the Waihi mining operations have used cyanide since modern operations began in 1988. A substantial database spanning more than 20 years of modern use demonstrates that cyanide can be transported, stored, used and disposed of in a safe manner, with no significant adverse effects on the environment.

Cyanide is used in the electroplating industries, the tanning industry and in specialised laboratories. Sodium cyanide is also used in New Zealand to produce a cyanide paste for opossum control. A complex cyanide, prussian blue, is used for dyeing jeans.

Before the cyanide process was introduced, although the assay value of the quartz at Martha Mine was reasonably high, gold recoveries were low. The first cyanidation plant in the world was established close to Waihi, at the Crown Mine at Karangahake, in 1889. By 1892 there were six cyanide plants on the Ohinemuri Goldfield, plus others at Thames and Coromandel. The process was a great success, as the recovery of gold improved from 40-50% to 85-95%. During this time tailings containing cyanide were deposited directly into the Ohinemuri River from various mining operations. Despite this practice, there have been no long term adverse environmental effects from cyanide use.

Given its past history, it is no wonder that cyanide can be perceived with alarm by the public. As a deadly poison, cyanide has been associated with events such as World War Two genocide, Middle Eastern wars, and the Jonestown suicides. Karle Scheele, who first synthesised cyanide, was killed as the result of cyanide exposure in his laboratory (Smith & Mudder 1994).

Hydrogen cyanide vapour has been used to fumigate buildings and ships, to exterminate rabbits, rodents, and large predators, and in horticultural practice to control insect pests that have developed resistance to other pesticides (Ballantyne, 1988). Sodium cyanide was used for about 50 years by the US Fish and Wildlife Service to control coyote numbers and so protect livestock.

Due to its historic uses, there are a number of myths and misconceptions relating to the toxicity of cyanide. It is important to realise that cyanide:

Cyanide and chemically related compounds are formed, excreted and degraded in nature by hundreds of species of bacteria, algae, fungi, plants and insects (Knowles, 1976 and US Fish and Wildlife Service, 1991). As a result, low levels of cyanide can appear in naturally occurring surface or groundwater samples which normally would not be expected to contain it.

At least 1,000 species of plants and micro-organisms from 90 families have been shown to contain one or more of nearly twenty compounds capable of producing cyanide (Seigler, 1976). About 800 species of higher plants from 70 to 80 families, including agriculturally important species such as the cassava, flax, sorghum, alfalfa, bamboo, peach, pear, cherry, plum, corn, potato, cotton, almond, and beans are cyanogenic (Eyjolfsson, 1970). Cyanide poisoning of livestock by forage sorghums and other cyanogenic plants is well documented (Mudder 1997).

Fungi and bacteria are prevalent producers of cyanide. In addition to plants and micro-organisms, insects have been shown to produce cyanide. Species of centipedes, millipedes, beetles, moths and butterflies synthesise and excrete cyanide for defensive purposes (Duffey, 1981).

A New Zealand case history documents the non fatal incidence of a three and a half year old girl who ingested an unspecified number of apricot kernels, some ten weeks after the apricot season had ended. The fruit stones had been kept dry and were cracked open at the time the kernels were ingested. The child rapidly developed signs of acute poisoning, and her breath smelled strongly of bitter almonds. When tested, apricot kernels from the same batch contained 0.33% of CN, an average of 2.15 mg/kernel.

With respect to adverse effects other than acute toxicity, there is no evidence that cyanide is teratogenic, mutagenic, carcinogenic, or bioaccumulative in humans, animals, or aquatic life (Smith & Mudder 1994). Moreover, there are no reports of cyanide biomagnification or cycling in living organisms, probably owing to its rapid detoxification (Hagelstein 1997). The majority of the absorbed cyanide reacts with thiosulphate in the presence of enzymes to produce thiocyanate, which is excreted in the urine over several days. Owing to this rapid detoxification, animals can ingest high sublethal doses of cyanide over extended periods without harm (Eisler 1991). The primary environmental concern relates to minimising short-term exposures to cyanide levels considered to be acutely toxic (Mudder 1997).

The forms of cyanide most often discussed from a monitoring viewpoint are free cyanide, weak acid dissociable (WAD) cyanide and total cyanide.

From an environmental perspective, the ‘toxicologically significant’ or ‘ecologically important’ form of cyanide is the WAD cyanide.

Modern mining in Waihi now has a database spanning more than two decades.

Because of the many reactions and transformations that it undergoes naturally, cyanide does not persist in the environment. Cyanide decay and transformation processes are very effective in reducing cyanide concentrations both within the decant pond water and within the tailings itself.

The drilling shows that the concentration of cyanide decreases significantly with depth, due to decay and transformation processes. In the upper four to six metres of an active tailings pond, free cyanide rapidly decays. However, below that depth, the remaining WAD cyanide is present mainly as copper cyanide complexes. Transformation processes convert the copper cyanide to the non-toxic iron cyanide form and insoluble CuCN. Iron cyanide is a very stable complex. These processes have been observed in other similar storage facilities, and prevent long term leaching of cyanide from the tailings. This is reflected in the cyanide concentration in the tailings underdrainage water. 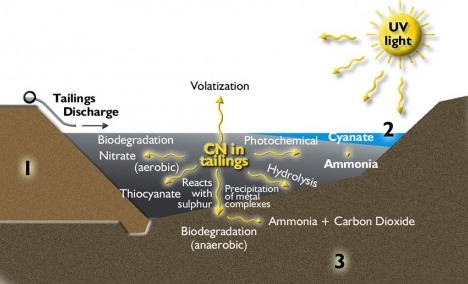 Effect of cyanide on plant growth

In 1993 plant growth trials were established on oxidised tailings. The trials involved the establishment of both grass and native species in both fertilised tailings, and tailings with no compost added. Pasture yields from plots without compost were 11,000 kilograms per hectare, compared to 14,000 kilograms per hectare from compost added plots. The survival rate of native plants in tailings was 100%. The addition of compost caused significantly higher growth rates in the first six months. Beyond six months no significant differences were observed.

Shortly after deposition, it was found that the tailings contained 150 grams per cubic metre of total cyanide. Assuming that the tailings bulk density is 1000 kilograms per cubic metre, and that all of the nitrogen mineralises to ammonium and nitrate nitrogen, this is equivalent to 81 kilograms of nitrogen per hectare to a depth of 10 cm. This is a substantial amount of nitrogen available to plants.

Our water treatment plant has a pre-treatment stage to destroy cyanide. Following treatment surplus water is discharged to the Ohinemuri River subject to a number of consent conditions. This discharge dilutes with river water. Following mixing the WAD cyanide level is well within the the instream value (0.1 grams per cubic metre) considered to be protective of aquatic life (Smith & Mudder 1991).

As described in the Rehabilitation section, it is expected that the water quality in the tailings pond in current use (Storage 1A) will require treatment for approximately three years once tailings deposition ceases. Once the water quality meets the required standards, it will be discharged directly to the Ohinemuri River.

A range of further information and case studies (including Martha Mine) can be found at the Australian Department of Environment and Heritage website.

ATSDR 1995, Toxicological Profile of Cyanide, Prepared by Research Triangle Institute for the US Department of Health and Human Services, Agency for Toxic Substances and Disease Registry (ATDSR), Atlanta, Georgia, August 1995.

Hagelstein 1997. ‘The Ecotoxicological properties of Cyanide’, in Short Course on Management of Cyanide in Mining, ACMRR, Perth, April, 1997.

Mudder, T. 1997. ‘The Sources and Environmental Significance of Low Levels of Cyanide’, in Short Course on Management of Cyanide in Mining, ACMRR, Perth, April, 1997.